Concerning the mechanical aspect of the AUV 7, the members decided to shape it as a cross to allow a better control over it as well as to make mathematical assumptions over its design as it is truly symmetrical on both the x and the y axis. Another advantage of the cross-shaped body it that it allows a better repartition of the components on the four arms as well as easier change in the configuration of the instruments. The main part of the hull is compact, hollow, and is made of carbon fiber. This leaves more internal space in the center of the sub to place electronical components as well as ballast for the static balancing of the submarine.

The design of the hull was determined to optimize the space for the components, allow an easier access to them, and to have a better control over the position the ballast plates used to manage the center of gravity. The arms were designed to allow easy insertion and removal of the electronics they contain and, just as importantly, an efficient heat management of those. 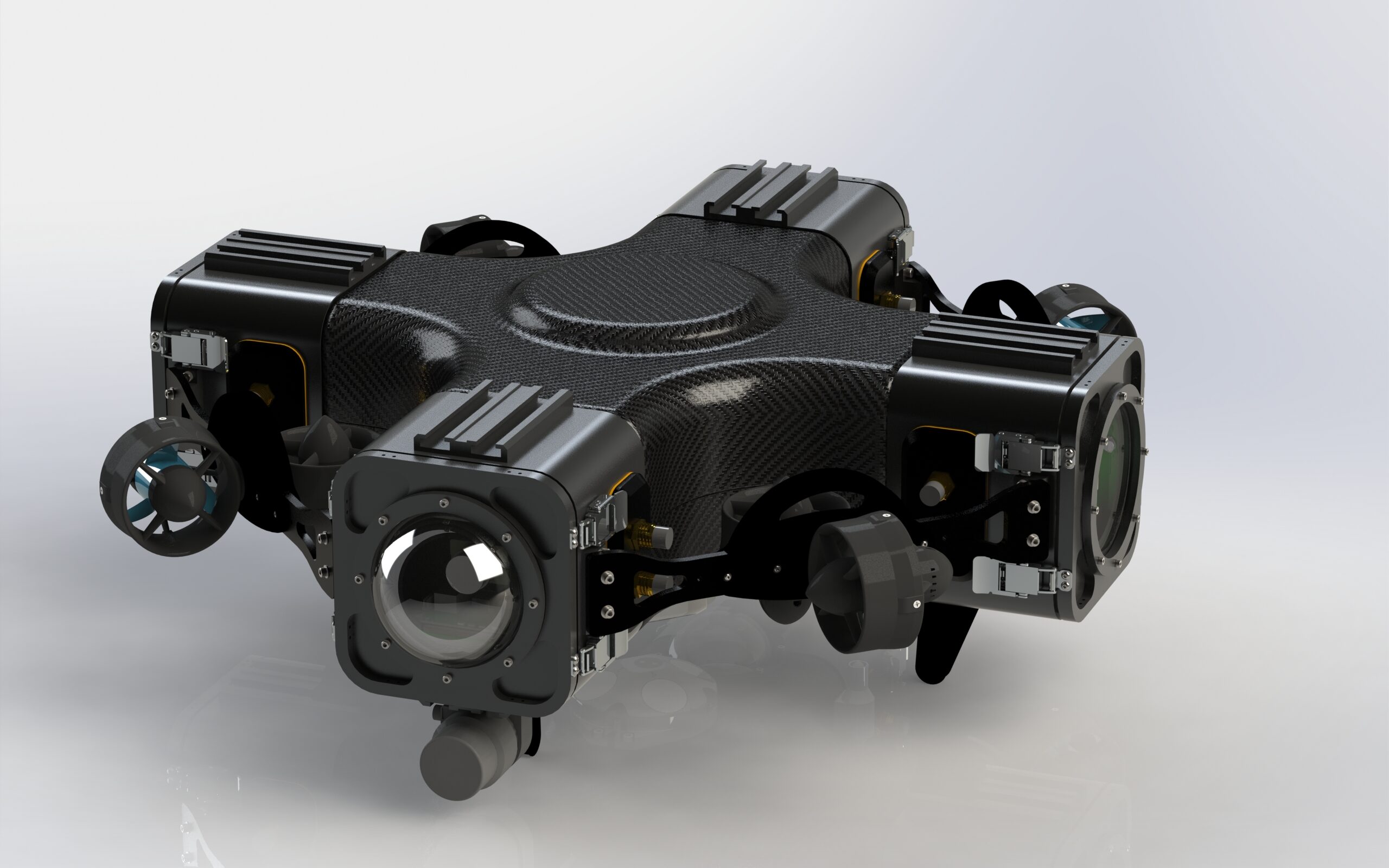 The choice of the carbon fiber to build the main part of the hull was made to reduce the waste of the materials used in the fabrication process. In fact, making the hollow hull in aluminum would have required to chew off the major part of the raw material as well as a two pieced assembly. Using a composite material allowed a much more efficient use of the material and a bigger internal size because of the strong structural properties of the carbon fiber which permitted a thinner build of the hull compared to an aluminum build with the same external size. This enhanced internal space makes for better cable and ballast management. However, the team succeeded in the making of this piece by going through a few trials. Indeed, the first time, the hull was made using four layers of carbon fiber which proved to be too flimsy to keep a rigid main structure and to resist the pressure exercised by the water. The following tryout was made using two halves made of six layers and, after these halves were glued together at their meeting flange, seemed to provide enough structural rigidity for the submarine. But it did not. The round-shaped center, hosting the Doppler Velocity Log (DVL) and a camera, would collapse as a pressure was applied on it. To address this problem, the mechanical team reinforced the center of the hull by designing and 3D printing two plastic plates that receive four threaded rods that push outward on the hull using nuts. Though the reinforcement chews up some space in the hull, the rods ended up being also the support on which the ballast is fixated, turning the problem into a solution.

The four arms of the cross are made of four aluminum blocks that were machined by one of the team members, using a computer numerical control (CNC) machine, and anodized for additional protection. These are essential for the heat management of the AUV since the computer and the power supply output a lot of heat. Each of the arms’ extremity ends with a cap that grants an easy access to the components the arm contains.

Additionally, the team opted for T-slots to support the various instruments fixated outside of the hull because they are compatible with many standard hardware. They therefore allow different configurations as well as the use of standard tooling to add or remove the instruments. As for the torpedoes, they are auto propelled by an electrical motor which instantly solves the problems caused by the bulky pneumatic system used on the previous design as it is not need anymore.

Concerning the electrical aspect of the submarine, the objective with the new design was to have a profound knowledge of the technology used by the AUV. With the coming and going of the team members, the understanding of the old system’s technicalities and subtleties was lost. Additionally, the mechanical constraints of the new concept made the old electronics unfit while the addition of two motors, for a total of eight, cranked up the load higher than the power supply cards could support.

The two batteries in the latest AUV are 4S batteries, that have a 14.8V nominal voltage, which, despite having a lesser capacity than the old 7S batteries (25.9V), are more adequate for the brushless motors. In fact, with the 4S batteries, there is no need to lower the tension for the motors. Each power supply cards feeding the motors has two channels of the same nominal voltage as the battery. Each of these channels control one motor and can be activated or deactivated using a type N Mosfet transistor. A third power channel has been developed with a switched-mode power supply, more specifically a buck converter, to provide 12V to the computer and the DVL. On each power supply card, the system controls the opening of the channels as well as monitors the temperature, the current in the channels, and the tension of the batteries and the channels.

The communication protocol used to rely on a CAN network. Instead, the new AUV uses a RS-485 full duplex network between the 14 devices. This protocol was developed by one of the members of the team and is specifically designed for our application in order to optimize bandwidth usage and help with flexibility.

On the AUV 7, the backplanes are designed to facilitate the interchangeability of the components to be able to modify them and test them easily. Also, since the new design has less backplanes than the old one, there are a lot more wires which makes cable management more difficult especially since the small size of the hull restrains the accessibility.

This is the first submarine who adopted the framework ROS. Before, all the modules where coded using Java and JAUS as the communication protocol.

On this right diagram, each square case is a node, all communications go downward towards the grey cases representing the external devices, and their feedback, or data, goes upwards towards the decisional levels. The blue nodes’ layer is the one communicating with these devices. For example, provider_thruster tells the thrusters how much power they should output. The green nodes’ layer is the decisional layer and sends information to the blue nodes so that they control the external devices accordingly. Simply put, the blue nodes act like translators between the decisional level and the devices. This architecture has the advantage to allow easy improvement and modification since changing a device will only have an impact on the blue node to which is communicates, leaving the other layers untouched. 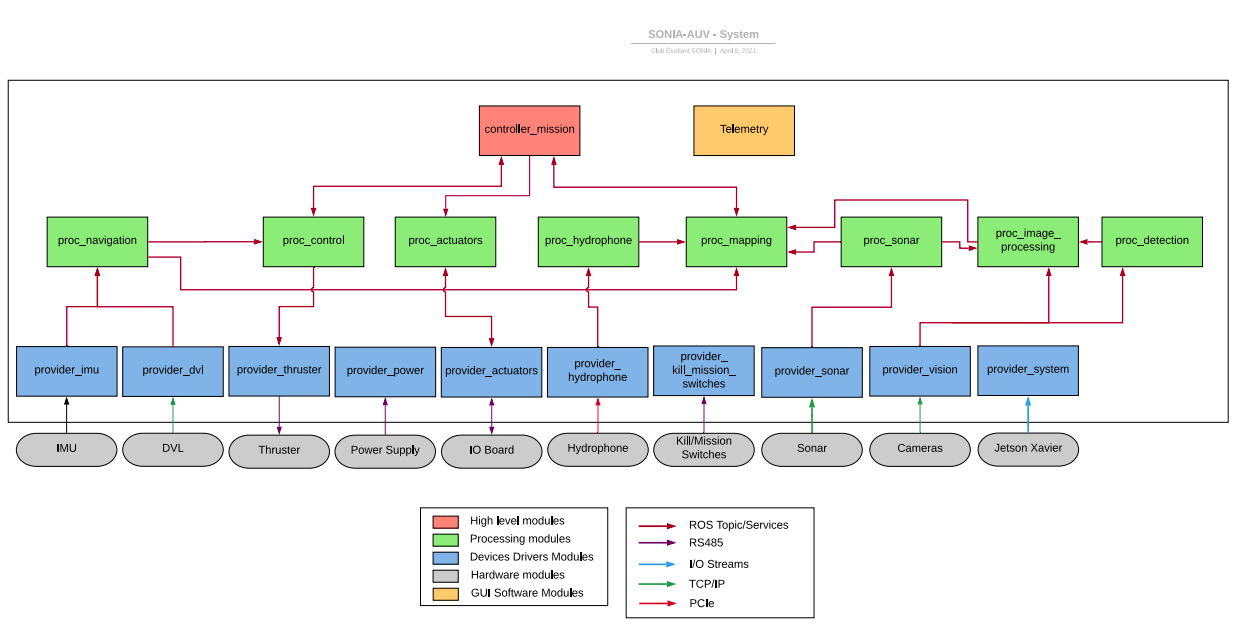 Find us on the web

Do not hesitate to reach out!